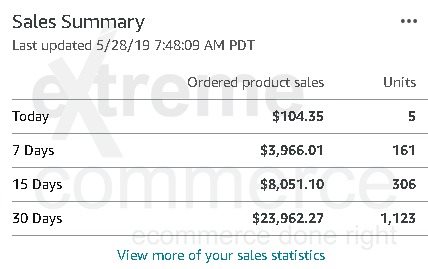 My Story With EC


I had only one goal in mind and that was to gather investment for my business, to do something in Pakistan so I get to live with my family and not the abnormal life of a non-resident Pakistani where you get to see your Kids twice a Year.

My relationship with Extreme Commerce started in March 2018 when I first attended the seminar of Sunny Bhai in Islamabad and enrolled myself in Boot-Camp.

So the first product launched in September 2018 and the bleeding started. Now this was the time when I had no job, I was paying $240 a fixed amount each month to a person whose Amazon ID I was using. First 1000 pieces of inventory were gone and I was still bleeding as this was a Hard to rank product I chose to work with. Nothing was making sense but the belief in the mentor Kept me going, I knew at the back of my mind when warren buffet says “The markets are a device to transfer Money from the Impatient to the Patient” and when Sunny Ali says I need Students with Big Gurdas, means the same thing so I kept on bleeding.

Long story Short, Me and Sunny Bhai became partners in that list. With his continuous mentorship day and night, we ranked that product and now we stand at 146 reviews and a lot of organic orders coming in daily—The idea is to flip this list at 200 reviews Insha’Allah!

Earlier this year I decided to go all in and became Sunny Bhai’s Partner in two more lists and now we have 3 Lists That I run under his Supervision, we are profitable in 2 of them and soon will be profitable in the third one too.

My suggestion to the newcomers is that doubt and procrastination kills the biggest of dreams, regret weighs a Ton, so do your due diligence but once you're in, hold your grounds and remember one thing “It’s the same wind that douses a Candle but Fans a Fire.

I have always desired to be an entrepreneur for as long as I can remember, I wasn’t happy with a typical 9 to 5 job; working for a boss.

By profession, I have been working as an IT Infrastructure Project Manager in KSA. But on the contrary, I always had a business aptitude and mindset.

Fields like Amazon and eBay have always seemed like great platforms to start with and through Amazon is a globally recognized platform.

I came to know about the Extreme Commerce Facebook group a year ago. I had initial doubts about the group but with time Amazon & ecommerce seemed doable.

Let’s start with my Intro. I'm Danish Jabbar. I am 26-year-old and have completed my degree in ACCA. Not to hide that I’ve failed in two startups already.

From 2010 to 2018, I worked in oil and gas projects throughout Asia and Middle East, as well as Papua New Guinea

A year ago I didn't have any interest in ecommerce until my friends asked me to check out this guy trending on Facebook, informing Pakistanis about Amazon.

I am 22 years old. Back in Dec 2018, when I came to know about Extreme Commerce, I instantly registered for 1-1 Coaching program.

We started our journey on amazon about 10 months ago, with the help of the EC team via boot camp and why is it so?

Have a success story to tell ? click the link below to submit your success story and get a chance to publish yourself on our website